The Religious Worlds institute introduces teachers to American religious diversity, and to a wide range of issues surrounding the study of religion in K-12 schools — the three-week curriculum cannot be reduced to any single, monolithic perspective.  That said, we do have a pedagogic agenda:  Above all, we are working to encourage a shift from the study of “world religions” to the study of “lived religion” in American schools.

“What the heck does that mean?” you may well ask.  The term “lived religion” has its roots in academic scholarship (in the work of historians and anthropologists like Nancy Ammerman, David Hall, Meredith McGuire, and especially Robert Orsi) but it’s not just theoretical jargon or an ivory tower concern.  Indeed, the concept of lived religion speaks to important truths about religious belief and practice that can help your students develop a richer understanding of their diverse society.  This page will explain why by contrasting the study of lived religion with the study of world religions, then give a brief example.  (we’ll get to that orange soon enough!)

The vast majority of K-12 curr­icula for the study of religion are still structured by the “world religions” pedagogic model that was dominant in aca­demic religious studies in the mid-twentieth century.  The world religions model conceptualizes religious diversity in terms of a fixed set of major traditions, each of which is defined by a fixed set of common features: its core doctrines or beliefs, its sacred texts (if any), the life story of its founder (if any), and its major holidays or ritual practices.  The religious lives of 1.6 billion Muslims, for example, may be reduced to a dis­cussion of the Five Pillars of Islam, brief selections from the Qur’an, an account of the life of Mohammad, and a discussion of the customs surrounding the Hajj or Ramadan.  The religious lives of 600 million Buddhists may be encapsulated in the Four Noble Truths, a sutra or two, the life story of the historical Buddha, and the practice of meditation.  This “dates and doctrines” approach to religious diversity may give students the answers to straightforward factual questions about major religious traditions, but it does not convey the rich diversity within all traditions, or give students any real understanding of their neighbors’ religious lives.

By contrast, the study of “lived religion” takes the everyday practices, discourses, and experiences of specific faith communities as the starting point for any discussion of religious diversity.  It recognizes that Muslims in Dakar and Detroit, or Buddhists in Seattle and Seoul, may have dramat­ically different understand­ings of the doctrines, rituals, and texts at the heart of their traditions.  Indeed, members of a single congregation — men and women, gay and straight, Black and White, young and old — may have dramat­ically different views of their traditions.  Rather than limiting the study of religion to canonical doctrines, a lived religion approach thus encourages us to explore a wide range of popular beliefs and practices — all the creative things that different people do with their religious traditions.  As the influential historian of religion Robert Orsi puts it:

The study of lived religion situates all religious creativity within culture and approaches all religion as lived experience . . . . The key questions concern what people do with religious idioms, how they use them, what they make of themselves and their worlds with them, and how, in turn, men, women, and children are fundamentally shaped by the worlds they are making as they make these worlds. There is no religion apart from this, no religion that people have not taken up in their hands.  (click here or below to download Orsi’s essay)

This is the simple truth at the heart of lived religion pedagogy: “There is no religion . . . that people have not taken up in their hands.”  Religious life is fundamentally creative and thoroughly human.  No one simply “follows” the doctrines of their tradition, mindlessly applying a static body of received truth.  That’s just not how people work. 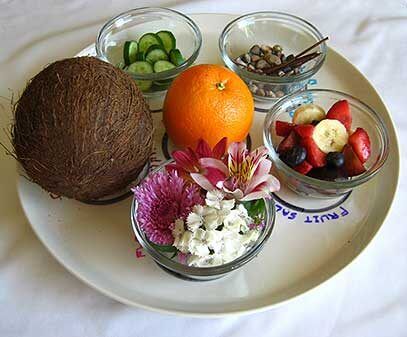 Which brings us, at last, to the orange that may or may not have been sitting on your neighbor’s seder plate (or yours) during Passover last spring.  If you’ve ever studied Judaism — even the “dates and doctrines” version — you probably know that many Jews commemorate the ancient Israelite exodus from Egypt with a ritual meal known as the Passover seder. In the middle of a seder table, sandwiched between the matzah and Manischewitz, one gen­erally finds an ornate plate of five or six symbolic foods representing central themes of the Passover story — horseradish to mark the bitterness of slavery, a lamb shank bone to recall the pas­chal sacrifice on the eve of the exodus, and so on. Thus far we are solidly in the realm of canonical doctrine, ritual, and text. The symbolism of these foods, and even their placement on the plate, is specified fairly clearly in the Talmud and other rabbinic texts.  But what about that orange?  And that coconut?  Traditional Jewish texts have nothing to say about these foods, but there they are anyway, in this photo and in quite a few Amer­ican Jew­ish homes.  What’s up with that?

Well, the story goes that some time in the 1980s, an influential male rabbi told the Jewish feminist scholar Susannah Heschel that “A woman on the bimah [on the pulpit – ie, a female rabbi] is like an orange on a seder plate [ie, inappropriate and out of place].”  The story is most likely apocryphal, but it got around anyway.  And beginning in the 1990s, a growing number of Jewish feminists and their families began putting oranges on their seder plates to mark their commitment to gender equality in Jewish life.  Once this got going, other Jews began to use other foods to mark their concern with other social or ethical issues.  An olive or an olive branch on the seder plate shows one’s support for a just peace between Israel and Palestine.  A coconut shows support for LGBTQ Jews, who are too often forced to hide their true selves in Jewish communal life, like the rich meat locked within the hard shell of a coconut.  Indeed, some Jews take this ritual innovation a sub­vers­ive step further, including a small crust of bread on their seder plate to show support for LGBTQ Jews, despite (or perhaps because of) the clear prohibition in Jewish law on eating leavened bread during Passover, let alone placing it on the seder plate.

These are just a few examples of contemporary lived religion — of the extraordinary religious creativity we ignore when we limit discussions of religious diversity to the “dates and doc­trines” of major traditions.  There is nothing in canonical text or doctrine tell­ing your Jewish neighbors to put an orange on their seder plate, or do yoga in synagogue, or for that matter give their daughter a Bat Mitzvah, but you can’t understand American Jew­ish life without understanding practices like these.

Through its focus on lived religion, the Religious Worlds of New York summer institute helps K-12 teachers offer their students a subtle, empathic understanding of religious diversity — the kind of understanding they need to be full participants in their plural­istic society.

For further reflections on lived religion, click here to download “Is the Study of Lived Religion Irrelevant to the World We Live in?,” by leading scholar of religion Robert Orsi.

For a discussion of K-12 lived religion pedagogy, click here to download “From World Religions to Lived Religion: Towards a Pedagogy of Civic Engagement,” by institute director Henry Goldschmidt.

Back To Top
×Close search
Search